The Export Control Law is not only an integration and adjustment of China’s current export control system, but also another powerful weapon for China to safeguard its national security and interests. Different from the existing “Unreliable Entity List System” which primarily sets restrictions on “people/entities”, the Export Control Law mainly takes prohibitive or restrictive measures against the transfer of controlled “items”. For both domestic and foreign enterprises engaging in import and export trade or related business, the export control compliance is more important than ever, and a complete review of companies’ current export control compliance system is recommended to be done immediately to reduce risks.

Since the end of the 1990s, China has promulgated six export control administrative regulations and rules concerning controlled items related to nuclear, biological, chemical, missile and military products. The changes of the Export Control Law brought to the China’s current export control system are listed below:

(2) Expand the scope of the export activities to be controlled.

(3) Add new measures of temporary control, ban (and other reciprocal measures). These new measures are temporary sanctions which gives authorities discretion to decide on a case-by-case basis.

(4) Establish “control list for importers and end users” (hereinafter referred to as “Control List for IE”) and add the procedure of removal from it. This procedure gives enterprises in the list a second chance to comply with the laws and to be removed.

(5) Encourage enterprises to establish internal export control compliance system. Incentives or green channels to obtain permits/licenses will be granted by the government authorities as encouragement.

(6) Impose criminal penalties. Exporting items prohibited by the State, as well as exporting controlled items without permits will be investigated for criminal liability.

Only the above-mentioned items have the risk of being prohibited or restricted to be exported. As a result of technical information and data being included into the controlled items by the Export Control Law, the enterprises having business over cross-border research or technology transfer may be affected. For example, a domestic enterprise provides services such as research, joint research or technology sales to a foreign enterprise may be deemed as technology exporting and thus being controlled. Of course, whether the items will be considered as one of the controlled items depends on the details of the Control List which will be further clarified and refined by regulations and rules in the future.

(2) Entities to be controlled

Entities to be controlled by the Export Control Law are listed below:

The indirect export activities such as "deemed export" and "re-export" being included in the scope of control expand the scope and forms of controlled activities. For example, the delivery of controlled items to foreign entities within the territory of China may also be controlled. Of course, the scope is still vague and needs to be further clarified and implemented by regulations and rules in the future.

(a)     Control Measures over the Items

(b) Control over Importers and End-users

The Export Control Law also stipulates that for countries and regions having abusive use of export control measures, China has the right to take reciprocal measures. The implementation of this provision in the future deserves enterprises’ attention, and to a certain extent, exporters in China with major business to the United States will have a high risk of being affected combined with the current Sino-US trade war.

Severe punishment, including criminal and administrative liabilities and extraterritorial effect, may be imposed for violating the Export Control Law.

The Export Control Law stipulates in principle the extraterritorial enforcement jurisdiction of the law, that is, if a foreign enterprise violates the Export Control Law in China (for example, involving criminal accomplices), or violates the regulations when re-exporting the controlled items purchased from China abroad, it may be investigated for relevant legal liabilities.

To sum up, export compliance can refer to the flow chart below: 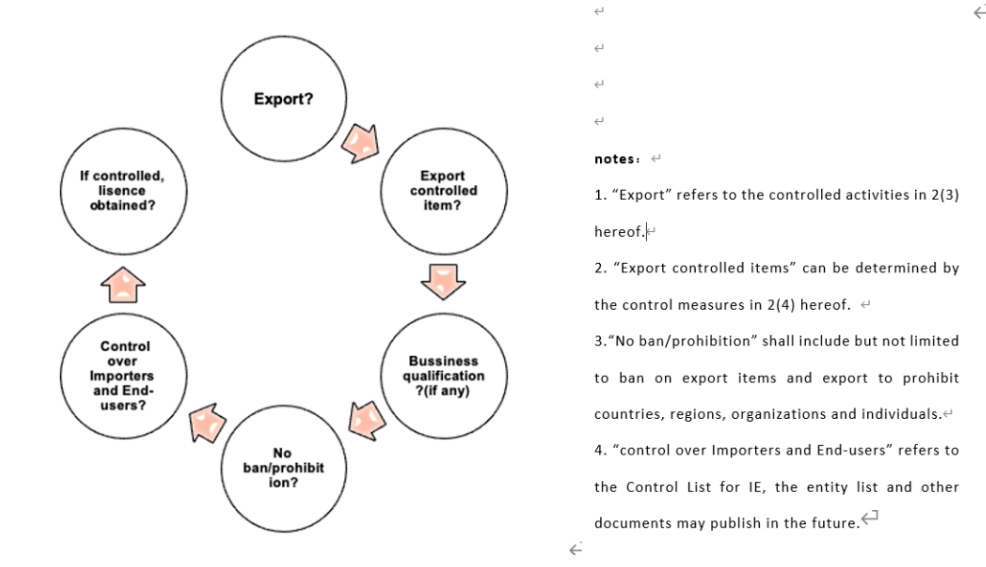 Enterprises are suggested to take the following steps to make sure its compliance of China’s current export control system.

We will continue to follow up and update our clients on the new PRC export control system. Please contact us if you have any questions and we are happy to provide consultation and compliance suggestions.