In international trade, for taxpayers, if they can make full use of the rules of origin of relevant countries in the supply chain, reasonably arrange and organize the procurement, manufacturing, processing, logistics and other links of raw materials, so as to enjoy the preferential policies brought by the rules of origin to the greatest extent, they can legally and reasonably reduce the operating costs and enhance the comprehensive competitiveness. However, the determination of the origin of goods needs technical skills. It is necessary to accurately understand and master the rules of origin, before making the decision. Otherwise, it may encounter the risk of compliance due to the wrong declaration of origin, which may result in administrative punishment at least, and may even constitute smuggling crime. In this issue, the authors will take you to explore and understand the Customs rules of origin, so as to grasp the business opportunities and perfect the compliance management.

I. Five Questions Helping to Understand the Basic Concepts of Rules of Origin

Origin, commodity classification and commodity valuation are considered as the three major technical problems in international trade. Different from the “explicit” impact of commodity classification and commodity valuation exerted on the interests of enterprises, the role of origin is more like an “invisible hand”. Although it is invisible, it directly affects the tax preference that goods can enjoy and the control policies that need to be implemented. In recent years, with the increasingly frequent and intensified trade frictions between countries, this invisible hand is more and more powerful, which makes import and export enterprises have to pay attention to it. In this issue, the authors will take you to understand the basic knowledge of China’s rules of origin. We hope it will help.

Generally speaking, origin is the economic “nationality” of goods. It refers to the origin of goods in international trade, i.e., the place where goods are produced, collected, raised, extracted, processed and manufactured.

2. Why need to determine the origin of the goods?

In international trade, origin symbolizes the “specific identity” of goods, and is the reference for goods quality and brand, which directly affects the price, quality, reputation and trade treatment of goods. When it comes to trade treatment, for example, the implementation of national trade control policies (anti-dumping, quota control, quarantine restrictions, etc.) is often carried out through the origin as a medium.

3. What is a certificate of origin?

4.What are rules of origin?

As the name implies, the rules of origin are generally applicable laws, regulations and administrative rulings implemented by various countries to determine the origin of goods. In short, it is the rules to be followed and applied when determining the origin of goods. China’s rules of origin are divided into rules on non-preferential origin and rules on preferential origin.

5. What are the legal consequences of wrong declaration of origin?

The origin of imports and exports is an important basis for the Customs to determine and implement national preferential tariff policies, most favored nation treatment, anti-dumping and countervailing, safeguard measures, origin mark management, country quantity restriction, tariff quota and other trade measures, as well as for government procurement, trade statistics and other activities. According to the relevant provisions of customs laws, enterprises have the obligation to declare the origin of goods truthfully and accurately. If the declaration of origin is wrong and the customs investigation finds that it is in violation of the customs supervision regulations or other behaviors in violation of the Customs Law, the Customs shall punish these behaviors in accordance with the provisions of the Customs Law and the Implementation Regulations of the Customs on Administrative Penalties; if a crime is constituted, the company and relevant personnel will also be investigated for criminal responsibility according to law.

II. Classification and Legal Basis of Rules of Origin in China

(I) Classification of Rules of Origin in China

Rules on Non-preferential Origin refers to the rules of origin independently formulated by a country’s legislation according to the needs of implementing its customs tariff and other trade measures, so it is also called “autonomous rules of origin”. The implementation of rules on non-preferential origin must comply with the principle of MFN treatment, i.e., it must be applied to all imported goods with MFN origin universally without discrimination.

The legal basis of the two types of rules of origin is different.

At present, the World Trade Organization’s Rules on Non-Preferential Origin has not been issued. The rules on non-preferential origin are still independently formulated by the domestic legislation of each country. Specifically in China, the legal basis is mainly the Regulations of the People’s Republic of China on Place of Origin of Imports and Exports (hereinafter referred to as the Regulations on Place of Origin) and the Provisions of the Customs of the PRC on Executing “Provisions on the Substantial Transformation of Criteria in Non-Preferential Rules of Origin”.

III. Differences between Two Types of Rules of Origin

Although they are both rules of origin, there are great differences between rules on preferential origin and non-preferential origin, which can be seen from the definition and legal basis of the two in the second part of this issue. For easier understanding, the author makes a general distinction between the two through the form of table as follow, and makes a brief introduction one by one. 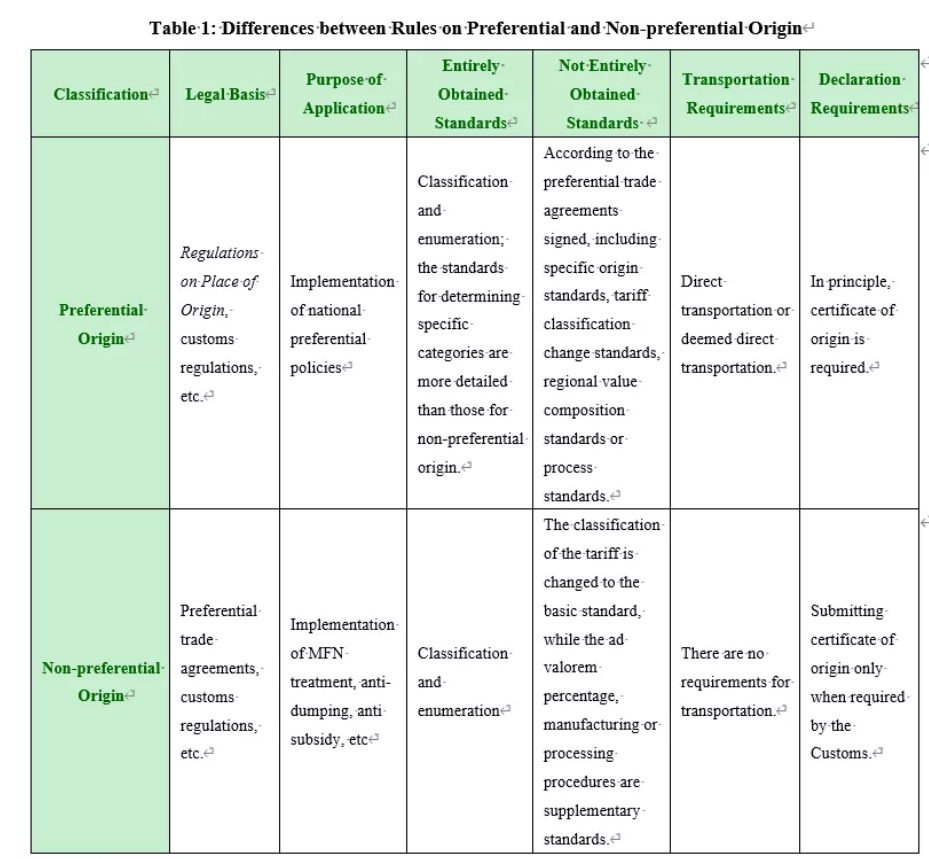 Rules on Preferential Origin are the rules of origin formulated for the purpose of implementing national preferential policies (tariffs), for example, the application of Free Trade Agreement members belongs to this category.

Both rules on preferential origin and non-preferential origin can be divided into “entirely obtained standards” and “not entirely obtained standards” in terms of origin standards. However, there are great differences in the content and application of specific standards, and enterprises need to determine according to the specific standards of origin in the actual international trade. As for the specific content of the origin standards, we will give a special introduction in the following articles.

The response to the customs royalty appraisal and supervision