On December 9, 2016, the Professional Committee of Competition Policy and Law (PCCPL) of China Society for World Trade Organization Studies (CWTO) and AllBright Law Offices co-hosted the Internet/IP Antitrust Seminar & 2016 Annual Conference of AllBright International Trade Committee in Friendship Hotel, Beijing. Participants of this Seminar included competent officials from the Price Supervision and Anti-Monopoly Bureau of the NDRC, the Anti-Monopoly Bureau of MOFCOM, the Anti-Monopoly and Anti-Unfair Competition Bureau of the SAIC, the Directorate General for Competition of European Commission (DGCOMP) and the German Federal Cartel Office; and China University of Political Science and Law (CUPL), Peking University, University of International Business and Economics, Nankai University, Chinese Academy of Social Sciences, Sun Yat-Sen University, New York University, University of Melbourne; experts and scholars at home and abroad; and several well-known domestic and international law firms and the executives of large multinational corporations such as Alibaba, Tencent and Ericsson. Mr. SHANG Ming, senior advisor of CWT (former General Director of the Anti-Monopoly Bureau of MOFCOM), Professor SHI Jianzhong (Vice President of CUPL) and FU Donghui (Managing Partner of AllBright Beijing Office) respectively made opening speech for this Conference. 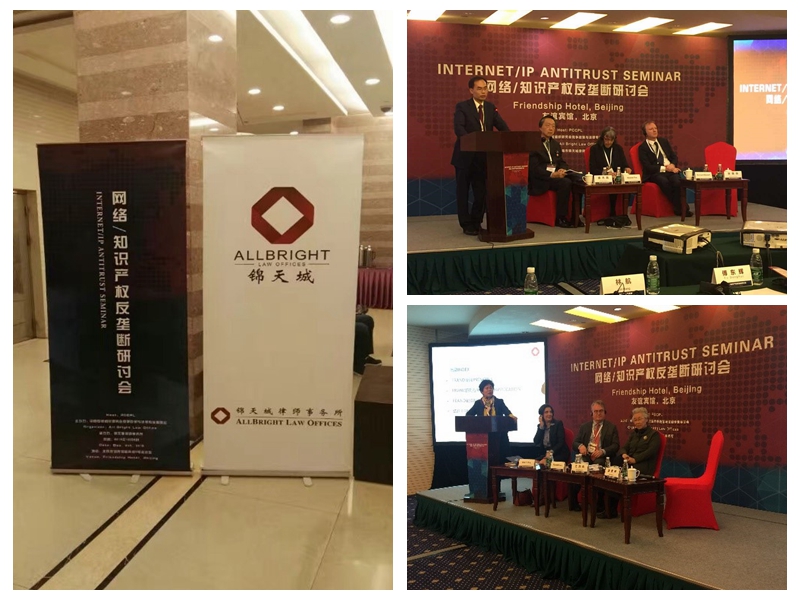 This Conference mainly discussed and explored relevant issues on IP antitrust in the background of internet and touched upon the most eye-catching topics in the past few years, including the relevant market issue in internet-related cases, the search engine, internet and anti-competition behavior, the subject faced by SEP licensors in antitrust litigation, and guest speakers made presentations from various perspectives of law, economics and practice in different levels. Representatives from three Chinese antitrust law enforcement authorities, DGCOMP and German competition enforcement bureau made official interpretation and explanation to the hot issues and difficulties of the current antitrust law enforcement in internet sector and interacted and communicated with corporation representatives and other industry delegates attending the Seminar. ZHANG Guoxun (Senior Consultant) and GUO Suping (Partner of AllBright Beijing Office) respectively made impressive speech on the “Payment in Exchange for Delay” and “FRAND Principle in Antitrust Litigation”, giving rise to a hot debate among the participants. Other guest speakers also made insightful presentations in terms of law, economics and practice. The Seminar ended in a pleasant and relaxed atmosphere.

This large-scale international seminar is a successful cooperation among many parties and has attracted high-ranked guests. Major domestic and foreign antitrust law enforcement authorities and several members of the Expert Advisory Committee of AMC of the State Council as well as leading experts in the industry, namely WANG Xiaoye, SHI Jianzhong and HUANG Yong, all attended the Seminar. Well-known Chinese and foreign internet enterprises such as Alibaba, Tencent and Ericsson also sent representatives to attend the Seminar. All these make this Seminar an unprecedented grand gathering of the antitrust sector at year-end. This Seminar commemorates the 8th anniversary of the promulgation of the PRC Antitrust Law and the 15th anniversary of China‘s entry into the WTO, and as well provides new thinking and opens up a new direction to future work.